I let my World of Warcraft subscription lapse in May. This might be the longest I've gone without playing it since I started, come to think of it, which could explain the cravings.
In addition to the cravings for the actual computer game, which I keep denying because it turns out there's a lot about that experience I just don't enjoy, the cravings have been manifesting recently as desires to play D&D in the world of WoW. I think it's a cool world, and there's a part of me—a rather large part, it turns out—that would love to play a night elf warrior in a tabletop experience where I'm not button-mashing, where my actions make a difference in the world, where there's a DM to adjudicate my doing whatever I want to, and all those other things that make tabletop gaming superior, in my estimation, to computer gaming. In fact, there's a lot of it that feels like the best of both worlds: I can have the tabletop experience I enjoy while also playing the soundtracks to the game and making abundant use of visual aids and quest design from the computer game.
So I've spent some time with the D&D Monster Builder, statting up monsters from the game in D&D terms. I've spent a lot of time on WoW fan sites like thottbot and wowhead and wowwiki, culling information about the world and its inhabitants and "translating" it into D&D content, from quests to monsters to storylines.
When I was at GenCon, I bought a couple of WoW mini singles: a couple of nagas, a voidwalker, and a timberling who made an appearance in my Greenbrier campaign a couple of weeks ago, as a myconid sovereign. They were $1 each, so I felt that was a pretty good investment for monsters that would be Large in the game anyway. Doesn't help much for gnomes and night elves and other Medium critters, but they're pretty cool additions to my minis collection.
So then today I got an idea. Using the 3D models of WoW mobs available on wowhead, I took snapshots of a bunch of monsters, front and back, printed them on cardstock, and turned them into stand-up figures, much like the Cardboard Heroes of old. Look: 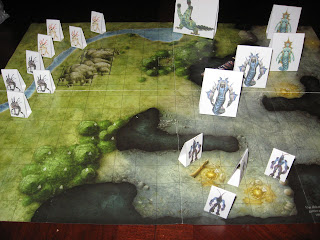 That's a bunch of murlocs on the left, some nagas on the right (I decided to make them Large after trying them both Large and Medium), and satyrs in the front.
More: 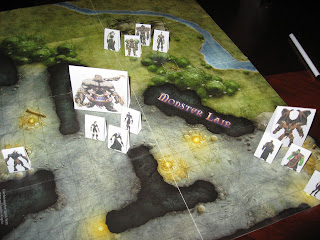 On the right, a demon and its cultists. Center, an abomination and three forsaken. Left, a worgen. And in the back are two orcs and two tauren.
Still more! 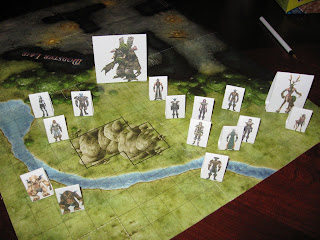 These are the woodsy folk: a couple of furbolgs (I decided to make them Medium after trying them Large) on the left, a bunch of night elves toward the right (with a son of Cenarius and a dryad at far right), Gnarl the ancient in the back, and two draenei and a human (Delgren the Purifier) behind the furbolgs.
I focused on creatures and characters to be found in Ashenvale, since that's where I've been putting most of my attention. It's aesthetically one of the most appealing zones to me, which almost makes up for its almost utter lack of good storylines. And Blackfathom Deeps is one of the only instances I've done, pathetically enough.
So then it occurred to me that the work I did might be useful to other people. Want to print the WoW minis I made? Visit this page and download the PDFs, and print them onto card stock. Want to make your own, visit the same page and download the photoshop files, delete (or hide) the layers showing the WoW monsters, and add your own images.
Caveats: I'm more or less happy with the Larges, but they don't stand up if you make the base too narrow. What I ended up doing was not cutting through the page margin at the top of the page, so I got a wider base on them.
I'm really not happy with the Huges. They take up a row of three squares, rather than a box of nine squares. And it's just possible that all the Huges I did ought to be Large anyway. Thoughts on making effective Huge monsters in this format would be welcome, but it's possible that a flat counter is just better. I suppose one could get all fancy and make an X-shaped figure with four views of the monster... oh, geez, now I'm going to have to try that.
Have fun!
Posted by James at 8:39 PM

I think that going with the 'X' configuration would solve a lot of problems, both with square occupancy and stability for some of the figures.

Any chance of seeing your stats for a couple of the monsters?

So, are you using WoW monsters or are you going to set a campaign in the world?

Another option instead of the X is to print them of four sides and put them in a box configuration. (With the top and bottom open). I think the X will be tricky because you will have to print half of one image on one card and half on the other card and line them up exactly to make it look right.

Grats on stayong off of the crack :)

I fought my own long battle against my laziness - that is trying to substitute my D&D gaming fix with WoW, and won :) I've been clean now for two years!!

Good call on the conversion though - I am quite surprised we havent seen a P&P port of this yet.

Awesome job, James look forward to seeing more of these and maybe some stat blocks (hint,hint)

I think an "H" arrangement would work. Put the "front picture" on one leg of the "H"; but the back picture opposite.

It's not as easy to assemble, but it should be plenty stable.

You wouldn't have to place your life on maintain to pursue the degree of your goals. Phenolics are fabric-reinforced laminates which have high tensile and best mittens for men flexural strengthand work properly for electrical purposes. Thermosetting glass-reinforced laminates, like G10/FR4, are flame-retardant, heat-stable materials typically used for electrical insulation, protecting individuals from robust electrical currents. G10/FR4 can also be|may also be|can be} used in printed circuit boards for telecommunications units, {as properly as|in addition to} electrical controls like timers and transformers.