Here it is, June

May was pretty much a blur—spending two weeks of it in bed certainly contributed. I'm coming up on my 13th wedding anniversary (Monday), it's the last day of school for my son, and Origins starts in 3 weeks (I'm not going this year). So why's it still gray and rainy out?

It strikes me that a truly responsible blogger would take an entry like this and split it into four or five entries, to which it would then be possible to assign relevant categories. I'd have a "Writing" category, a "Books I've Read" category, and then some "Theological Musings," a new "Site News" category, and a "Conventions" entry. Would you like to pretend that we live in such a neatly organized world?

I'm the new custodian of the games library at work. I landed the job, in part, because I organized Rob Heinsoo's CDs while riding in his car. At least, that's how he tells the story. My version is that I took a CD out of the player, looked for the right case to put it in, finally found it, and had to remove another CD to put it in there. So then I started looking for the right case for that CD, and that's about when the mocking started. Anyway, the truth is that I am actually a pretty organized person. (For "pretty organized," you may choose to substitute "anal-retentive," as long as you're careful to write it out in full, with the hyphen.)

OK, on to the topics of the day: 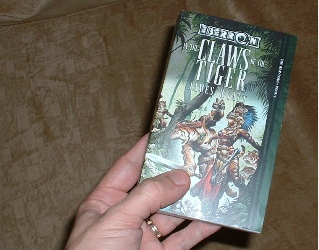 I walked into Tuesday's department meeting, and the book department art director had a copy in front of him (along with other books, including our reprint of Laurell K. Hamilton's Death of a Darklord). I was pretty excited that meeting. I called it my Precious. Then I brought it home. And now my wife is (re-)reading it.

As far as I know, the official release date is still July 11. Hey, Amazon (or someone...) has decided to pair this book with Book 1 of The Belgariad. Buy them both, get 5% off. Wacky and zany, simultaneously!

Reading
Last night I finished Elizabeth Kostova's The Historian, which I enjoyed a great deal. It was not exactly a fast-paced thrill ride of a book, but it was filled with likable, intelligent characters. It's not exactly a fresh take on the Dracula legend, but a very engaging immersion in it. And I had absolutely no qualms about her writing, as long as you can forgive her the deliberate pace of the 642-page book. Considering that it includes a fictional article from a historical journal, it at least reads like engaging history, not boring history.

Speaking of really long books, that was something clever I said about Dean Koontz's book I read a couple of weeks ago: I felt like he had written a 150-page book, and his editor had said, "This is great, but it needs to be twice as long."

All right, I have to share this, from SoMA: A Review of Religion and Culture:


Today is June 6, 2006—6-6-6—the day when the Antichrist, the very incarnation of Evil, will rise up, projectile vomiting green slime and bringing death, destruction, and decay to all the world. I'm referring, of course, to Ann Coulter. Today, the conservative commentator releases her latest foray into lunacy, “Godless: The Church of Liberalism.” She chose the book’s pub date specifically. "It's my little tribute to liberals to have it come out on six, six, six," said the Bad Seed in USA Today, confused about whom the joke is really on.

Da Vinci Code Movie
So I had reservations about seeing the movie after reading the book. My first misgivings occurred while I was reading the whole, flawed discourse by Teabing and Langdon, thinking I might freak out in the movie theater if I had to sit through it a second time. My second was reading Monte Cook's opinion of the movie: "a movie which proves that yes, both Tom Hanks and Ron Howard can indeed do wrong." Despite those misgivings, my wife and I went to see if last Friday. Our son had a sleepover at school (how cool is that?), and we had the night to ourselves and a movie gift card from her sister...

and we wasted it on that movie.

So, you know I had issues with the book. So what does it say about the movie that I felt compelled to defend the book? Not good things, my friends. Not good things.

Ian McKellen was the movie's only saving grace, and he could not buoy it from absolute suckage.

Google Ads
You'll notice I took 'em off. They bugged me, and there was no upside. Not for a site this size, with my small but faithful bunch of readers.

GenCon
Hey, I'm going to GenCon this year. I had last year entirely off from conventions, after going to four the year before (Winter Fantasy, Origins, GenCon, and Spring Revel Down Under), largely because of my involvement with Eberron. It'll be good to be back. I don't yet know what my work schedule is going to be, but I'm also planning on doing a book signing and, at every available opportunity, promoting the heck out of my novel. Be forewarned. Better yet, be forearmed, and carry a copy of it with you when you come talk to me at the show. :)

Say, have I mentioned that I wrote a novel?
Posted by James at 7:48 AM